This article concerns the due process rights of New York lawyers facing disciplinary charges. It highlights the historical constitutional development of due process rights in attorney discipline cases, briefly focuses on the relatively few precedents that address procedural due process in New York’s uniquely disjointed lawyer disciplinary system, and then describes the ABA’s Model Rules of Disciplinary Enforcement. Subsequent columns will discuss particular aspects of New York’s disciplinary system-e.g., interim suspensions, collateral estoppel, burden of proof, evidentiary standards, among other issues-from the standpoint of whether those components meet due process requirements.

As far back as 1824, the U.S. Supreme Court recognized that lawyers facing suspension from the bar have due process rights, stating: “…the profession of any attorney is of great importance to an individual, and the prosperity of his whole life may depend on its exercise. The right to exercise it ought not to be lightly or capriciously taken from him.” Ex Parte Burr (1824).1 The Supreme Court emphatically reiterated this sentiment in two Civil War era cases, Ex Parte Garland (1866)2 and Ex Parte Bradley (1868).3 In Bradley, the Supreme Court articulated more directly, in the context of a finding of contempt below, the right of an attorney to notice and an opportunity to be heard before his license to practice is removed:

[The lower court] possessed no power to punish him, upon an ex parte proceeding, without notice or opportunity of defense or explanation for misbehavior, or for any particular instance of the same generally in his office as attorney of the court, as claimed in the words of the return, “irrespective of the doctrine of contempts.”4

Fast forward to 1968. In a landmark case, Matter of Ruffalo,5 the Supreme Court recognized, as part of the guarantee of procedural due process, that an attorney in a disciplinary matter is constitutionally entitled to fair notice. John Ruffalo Jr. had appealed from a disbarment order of the Ohio Supreme Court, which order was partially predicated on amended charges that were only lodged against Ruffalo midstream in the hearing and after he (and another witness) had testified at length on all the material facts in the case. Declaring that disbarment proceedings are “of a quasi-criminal nature,” the Supreme Court stated that, “The charge must be known before the proceedings commence. They become a trap when, after they are underway, the charges are amended on the basis of testimony of the accused. He can then be given no opportunity to expunge the earlier statements and start fresh.”6

Two other Supreme Court cases also touch on due process rights of lawyers. In Spevack v. Klein,7 a case out of New York that preceded Ruffalo by one year, the Supreme Court held that the Fifth Amendment (via the 14th Amendment) self-incrimination clause extends its protection to lawyers in disciplinary cases, who cannot be disbarred (or otherwise disciplined) solely based on their own admissions. Subsequently, in Gentile v. State Bar of Nevada,8 the Supreme Court reversed a Nevada disciplinary sanction against a lawyer who convened a press conference after his client was indicted on criminal charges, holding, in part, that the Nevada rule prohibiting lawyers from making extrajudicial statements to the press that have a “substantial likelihood of prejudicing an adjudicative proceeding,” as formulated in Disciplinary Rule 7-107 and interpreted by the Nevada Supreme Court, was void for vagueness.

Notwithstanding the foregoing history, and the Supreme Court’s periodic expressions of constitutional support for lawyers’ due process rights, challenges by lawyers attempting to remedy alleged state court due process abuses in the lower federal courts have almost uniformly been rejected on abstention grounds.9 Thus, from the standpoint of federal constitutional guidance, we are left with fundamental, but only very general notions that while notice and the opportunity to be heard are the hallmarks of due process rights for lawyers, due process as applied will be left to case-by-case, state-by-state determinations, with broad discretion vested in each jurisdiction to provide a system of lawyer regulation that comports with what can be characterized as the minimal requirements of due process.

New York provides a prime example. In Murray v. Murphy10 the New York Court of Appeals affirmed that [t]he first fundamental of due process is notice of the charges made.” But in Matter of Kelly,11 decided shortly after Ruffalo, the Court of Appeals acknowledged- but limited the ruling in Ruffalo, stating:

As the Court of Appeals further explained in Matter of Dondi:13

The practice of law is a privilege, and while an attorney subject to discipline is entitled to due process, the protection of the public from the unscrupulous practitioner may interdict relief from certain unfairness that may arise in the course of the imposition of professional discipline. (citations omitted; emphasis added)14

Some may consider “certain unfairness” to be an unfortunate choice of words, but the Court of Appeals undoubtedly meant what it said about the relatively low level of “process” that is “due” in approving a civil burden of proof-the fair preponderance of evidence-in attorney disciplinary cases (Matter of Capoccia),15 and in holding that an attorney could be suspended without a hearing pending consideration of disciplinary charges so long as adequate notice is provided and the suspension order is based on the attorney’s admissions or other uncontroverted evidence of misconduct immediately threatening the public interest (Matter of Padilla).16

Writing more than 35 years ago in Mildner v. Gulotta, 405 F.Supp. 182 (1976), one of New York’s most distinguished federal jurists, Judge Jack Weinstein, had this to say in his dissent from the majority of a three-judge panel designated to review a constitutional challenge to New York’s disciplinary scheme (the majority rejected the challenge on abstention grounds):

Despite my high regard for New York’s tradition in maintaining the high ethical standards of its bar, I reluctantly conclude that its disciplinary procedure is constitutionally infirm in denying attorneys the due process and equal protection guaranteed by the Fourteenth Amendment of the U.S. Constitution. There is no inconsistency between fair treatment of lawyers and maintenance of the long tradition of their discipline by the courts. There is no good reason why members of the legal profession, who have done so much to protect the constitutional rights of others, should be deprived of justice with due process in hearings and appeals-rights available to all other professionals. As construed by New York courts, the statutory disciplinary procedure, Judiciary Law Sec. 90, is invalid.17

Judge Weinstein’s basic criticisms concerned the use of referees whose role is to “hear and report,” but not to “hear and determine.” He noted that the Appellate Division, as courts of original jurisdiction, decide facts without hearing and seeing witnesses, deny counsel the opportunity to orally argue the merits, and often fail to give reasons for a decision even when rejecting the report of the referee who has heard the witnesses.18

More than 20 years after Ruffalo, in 1989, the ABA promulgated the Model Rules for Disciplinary Enforcement. It hoped they would provide guidance to every jurisdiction that would be revising (or establishing for the first time) its formal rules of procedure in attorney discipline cases pursuant to the recommendations of the Clark Commission.19 Among other things, the ABA Model Enforcement Rules provide for such due process rights as: fair notice of the charges; right to counsel; right to cross-examine witnesses; right to present arguments to the adjudicators; right of appeal, including the filing of briefs and presentation of oral arguments before the court pursuant to the state rules governing civil appeals, with a requirement that the decision of the court be in writing and state the reasons for the decision (Model Rule 11); right to subpoena and discovery (Model Rules 14 and 15); and, application of the state rules of evidence in civil non-jury matters and, except as otherwise provided, the state rules of civil procedure, with “clear and convincing evidence” as the standard of proof (Model Rule 18).20

The ABA Model Enforcement Rules are useful as guideposts for national standards. A number of reputable authorities have also written excellent articles for law reviews and other legal publications regarding the due process rights of lawyers facing disciplinary charges.21 These, too, are valuable sources of reference regarding what a constitutionally valid system of lawyer regulation ought to look like.

In subsequent columns we will discuss whether particular aspects of New York’s attorney disciplinary procedures appear to comport with due process in light of the foregoing brief history and prevailing national standards.

Reprinted with permission from the March1, 2010 edition of the New York Law Journal ©2010 ALM Media Properties, LLC. All rights reserved. Further duplication without permission is prohibited. For information, contact 877-257-3382 – reprints@alm.com or visit www.almreprints.com.

Q & A With Hal R. Lieberman
The ‘Galasso’ Case and the Duty of Supervision 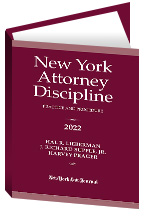